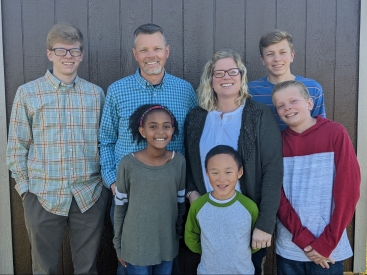 As followers of Jesus Christ, Nick and Marsha desire to lead their family to faithfully serve the Lord and love others as He loves all people. They continuously pray that their children turn into faithful followers of God and make a difference for the sake of the gospel. Nick and Marsha are tremendously blessed to know that God loves all people so much that He sent His only Son to die for their sins and the sins of the whole world, so that whoever trusts in Jesus Christ for eternal life will be saved from sin and eternal death. Jesus not only died on the cross, but He also rose from the dead, so anyone can live eternally with Him in heaven when that person surrenders his or her life to Jesus.

Now for a little bit about the Drake family. Nick grew up in southern Minnesota and northern Iowa. After graduating from West Hancock High School (1997) in Britt, Iowa, he went to Northwest Missouri State University in Maryville. College was a time of important changes in his life. While at Northwest, he realized he needed to give his life over to Jesus Christ, and God saved Nick from his sins, giving him eternal life. Northwest is also where Nick met his wonderful wife, Marsha. They fell in love there and got married after graduation. In the fall of 2007, they finished their time at Midwestern Seminary in Kansas City, where Nick received his Master of Divinity. During their time at seminary, they were blessed with their two oldest boys, Noah and Levi, and also had the incredible opportunity of being a part of Missouri Valley Baptist Church in Halls, Missouri, where Nick served on staff as the youth pastor.

Marsha grew up in central Missouri and is a graduate of North Callaway High School (1998) in Kingdom City. Her life was changed for ever when she trusted Christ as her Savior and Lord as a teenager. After graduating from Northwest in 2001 and getting married in 2002, Marsha and Nick both worked for The Salvation Army in the Twin Cities. Now as a stay-at-home mother, though, Marsha loves her job and is seeking to raise her children to love and follow Jesus and put others before themselves.

Moving to Turkey in January 2008, Nick and Marsha focused on learning Turkish, adapting to life there and living out their faith in Jesus Christ. Nick had a great time working with an amazing team and managing Umut Agaci Dernegi, a community center serving locals in Istanbul, and he and Marsha loved being involved in their local house church there, too. They made incredible friends (truly like family) during their years in Turkey, and they miss those dear friends a great deal. Nick worked for Kerusso Technologies in Project Management and Customer Care for 6.5 years, and is currently the pastor of Richland Baptist Church in Kingdom City, MO (since 2013). The Drake family could not be more blessed and thankful for how the Lord has directed their steps and led them through different transitions, and Nick and Marsha are continuing to learn the challenges and blessings of having five children.

Noah was born February 3, 2005, in North Kansas City, Missouri, and is becoming a fine young man. He is helping with student-led Bible studies at North Callaway High School and is also actively involved in our church’s youth group. He likes watching football and basketball and playing video games in his free time. Since June 2021, Noah has been working at Arby’s. They have the meats!

While school is not Noah’s favorite, he does a great job and has had a great attitude. His incredible memory never ceases to amaze, and his sense of humor (i.e. “Robotty“) brings many smiles and much laughter.

Noah has a lot of energy, and the Drakes are grateful for his rich personality and eagerness to learn. He has matured immensely over the past few years and made a public profession of his faith in Jesus Christ in early fall 2015, getting baptized shorting thereafter. What an encouragement it has been to see him learn about God and grow, despite the sinfulness of his parents. He is definitely best buddies with Levi (no matter what either one will admit), as they talk a lot and enjoy gaming together.

Levi was born October 28, 2006, also in North Kansas City, Missouri, and he isn’t short in his ability to keep the family entertained. A little more shy and reserved than his bigger brother, Levi still enjoys his share of attention and affection. Not one to easily give in to peer pressure, Levi is a defender of the underdog. His favorite things to do include being actively involved in our church’s youth group, playing high school basketball, and taking care of our dog, Lottie.

The Drakes praise God for Levi’s profession of faith in Jesus Christ in summer 2016 and his subsequent baptism shortly thereafter.

Nick and Marsha are grateful for Levi’s cute smile and sweet personality. Thankfully, like Noah, Levi is growing in the gospel and loves to recite his memory verses and participate in morning Bible story time. He and Noah both love their little brothers and sister and can even be very good helpers (at times) with Silas, Zoe and Micah.

Born November 24, 2010, in Istanbul, Silas keeps us laughing with his cute and cheesy personality. Silas likes playing football and basketball, as well as watching movies and using his creativity outside. He is actively involved with our TeamKID children’s ministry with our church family, and in 2021 he publicly professed His faith in Jesus Christ as Savior and Lord and was baptized. Praise the Lord!.

Silas’ favorite hobbies include playing ball, chasing his siblings around (either to make them laugh or to get on their nerves), watching movies, riding his bike, building things, and making people laugh.  What a blessing it is to have kids! God has done so many amazing things for the Drake family, and they are beyond grateful for His grace and mercy in their lives.

Zoe was born October 30, 2011, in Ethiopia and has much protection from others with three big brothers and a father who owns and knows how to use a shotgun for intimidation purposes. 😉 As one can imagine, she is definitely adored and loved on in the Drake household.

Zoe has a precious personality. She is very happy and content and loves being around people. No doubt she has learned to be a very tough girl, getting roughed up by her brothers (all in love, of course). Still, her sweet personality will continue to develop and her easy smile will likely continue to melt hearts.

Zoe is involved with student council at school, and is always wanting to be on the go. She plays basketball and also hopes to be involved with volleyball and track. Like Silas, Zoe is actively involved with our TeamKID children’s ministry with our church family and just began taking piano lessons.

Micah was born April 3, 2015, in China, and he was adopted into the Drake family in May 2017. Immediately loved and adored by the entire family, Micah regularly brings joy and laughter to the Drakes with his cute smile, fun-loving personality, and quickly-developing sense of humor.

You can learn more about the Drakes’ adoption process of both Zoe and Micah here and read the updates here. God certainly continues to bless the Drakes and prove His faithfulness in and through their lives!

Partners
Now that you know a little more about the Drakes, they hope you will partner with them in prayer and be sure to let them know if there is ever any way in which they can pray for you. Thank you for your partnership for the sake of the gospel!